In 2020, nothing has gone to plan. Whether it’s orange skies due to wildfires or public schools closed because of the pandemic, it has been one problem after another.

But for Christina Torrez, it wasn’t just 2020, it has been her whole life. Placed into foster care at six, Christina spent her young life bouncing around foster homes in the Central Valley. She was removed from her family due to neglect but suffered much more in foster care, experiencing physical abuse.

From placement to placement, Christina protected her sister, who was three years younger, serving as a young mother to her. Remaining with her sister made it harder to find a long-term foster care placement, but she never wavered in her commitment to remaining together.

At age 13, Christina returned to her father, where she lived for three years. She re-entered foster care at age 16, when she became pregnant and gave birth to a healthy little girl. Instead of supporting Christina, her father refused to pick her up from the hospital. She returned to foster care, where she would remain until she “aged out” five years later.

As Christina recounts, “It was terrible to grow up in the foster care system, being abused physically, mentally and emotionally and having parents that don’t want anything to do with you.”

It would be understandable if she simply gave up. But that’s not what Christina has done. Instead, her hardship has motivated her to make a better life for herself and her family, which has grown to include three children. “Having my kids drives me to do better. I want them to know they are loved, no matter what. I want them to feel safe, no matter what. I wish I’d had someone to tell me that I was safe. I don’t want them to go through foster care and see the evil and the ugliness.”

Christina is making this possible by striving educationally. She is a college student at Bakersfield College where she majors in business and minors in human services. She intends to complete her bachelor’s degree at California State University at Bakersfield. Her dream is to receive her master’s degree in business administration from Fresno State and use her skills to counter the negative message many young people in foster care receive.

Christina wants people to understand that while foster youth face many challenges, they are not a lost cause; even small gestures make a difference for young people who are without support. “Yes, youth in foster care might have problems, but we can work on those problems as long as we have people to help us, people to say it’s ok, I am here to help. Not everyone has those people. Not a lot of foster youth have those people.”

Christina had a mentor named Katie who offered this kind of guidance during her most difficult times. She was in high school and living in a group home for young parents. “She came to me at a very low and volatile place. I was messing up a lot. Katie was the one to help me and talk to me. She helped me with my daughter and helped me buy my graduation dress, get into my first apartment.”

In addition to her mentor, Christina had the support of extended foster care and safe, affordable housing after she “aged out” of foster care at age 21. John Burton Advocates for Youth led the advocacy to establish extended foster care and has fought to strengthen it ever since. Most recently, John Burton Advocates for Youth advocated for an $8 million annual expansion to housing for former foster youth as well as a policy that will allow youth like Christina to maintain their financial aid, which is a lifeline for foster youth in college.

Christina worries about how foster youth are faring during the pandemic. She is glad that her sister can remain in foster care, but knows that even with this support, they are vulnerable. “I think that foster youth are more at risk during COVID than anyone else. They don’t know what the rights are. People are going to take advantage of the youth who don’t know what their rights are.” 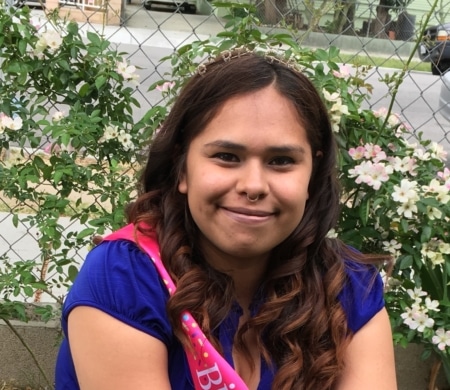